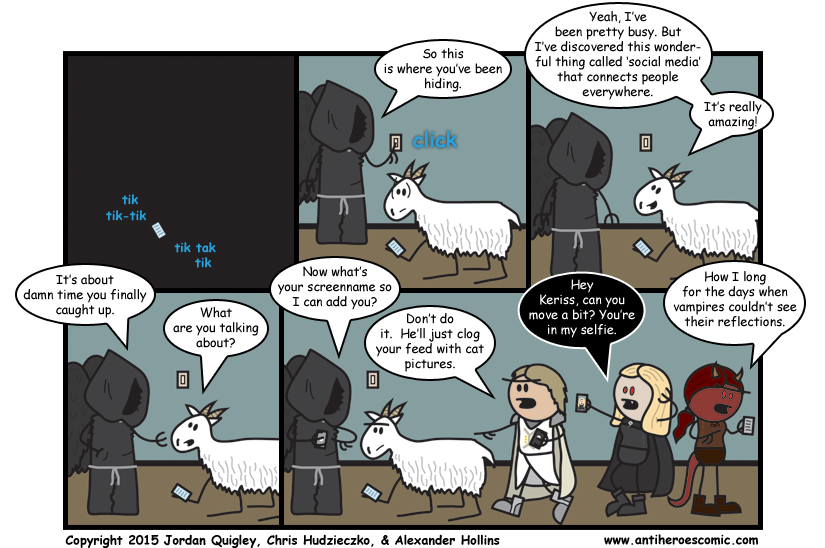 Soooo yeah, it's been a while. Needless to say, I've been busy. Team Dypen have been hard at work getting comics out in my absence and I have to thank them for that. I've seen that reception has been mixed, but I'm happy with the progress the comic has been making. Although things have slowed down lately, it's still a hell of a lot more than I've accomplished in the past few years. On that note...

First things first, this doesn't mean I'm coming back to the comic. There'll be some disappointment, I'm sure, but I'm still not in a place in life where it's feasible. However, that doesn't mean that I'm not doing anything these days. In fact, that's why I'm here. I've still got a couple things going on and I want my fans to be able to know what I'm up to.

First of all, I have a Twitter account. I've barely used it for anything up until now, but I'm trying to change that. If you just want to see my daily adventures in boring, then I would suggest following me. I'll also be posting updates here for any of my other projects over the internet, so it's pretty much your best bet for staying in touch with me and anything I might be involved with.

Second of all, I stream on Hitbox! Right now, there's not much of a regular schedule, but me and the administrator of this very website (CrazedEwok) are playing through The Elder Scrolls III: Morrowind on a weekly basis. I'll probably stream more varied stuff in time and if you want to stay updated then you can subscribe to my Hitbox channel or to my Twitter.

Third of all, for everything that I don't stream, I have a YouTube channel. There's a couple Let's Plays on my account and there's more content going up semi-regularly. I've also been editing and uploading my Morrowind streams to my channel and might end up sticking some more content (such as videos exploring the lore of Elder Scrolls) in with them once I get the time. Again, if you want to stay updated, then subscribe directly on YouTube or just follow my Twitter for general updates.

And finally, there might be some further projects in the works as well. Podcasts perhaps? I play tabletop games over Skype every week and oftentimes the audio gets recorded, so there's more than enough stuff to work with. Or maybe just a general podcast hosted by me and CrazedEwok? Who knows. Either way, there's always possibilities.

Thanks for being fans.

EDIT: I have an ask.fm profile now! Ask me questions about the comic, about my life, about games, about movies, about books, about whatever. You get the idea.

Once again, those links: