Anti-Heroes #121: He Believes He Can Fly 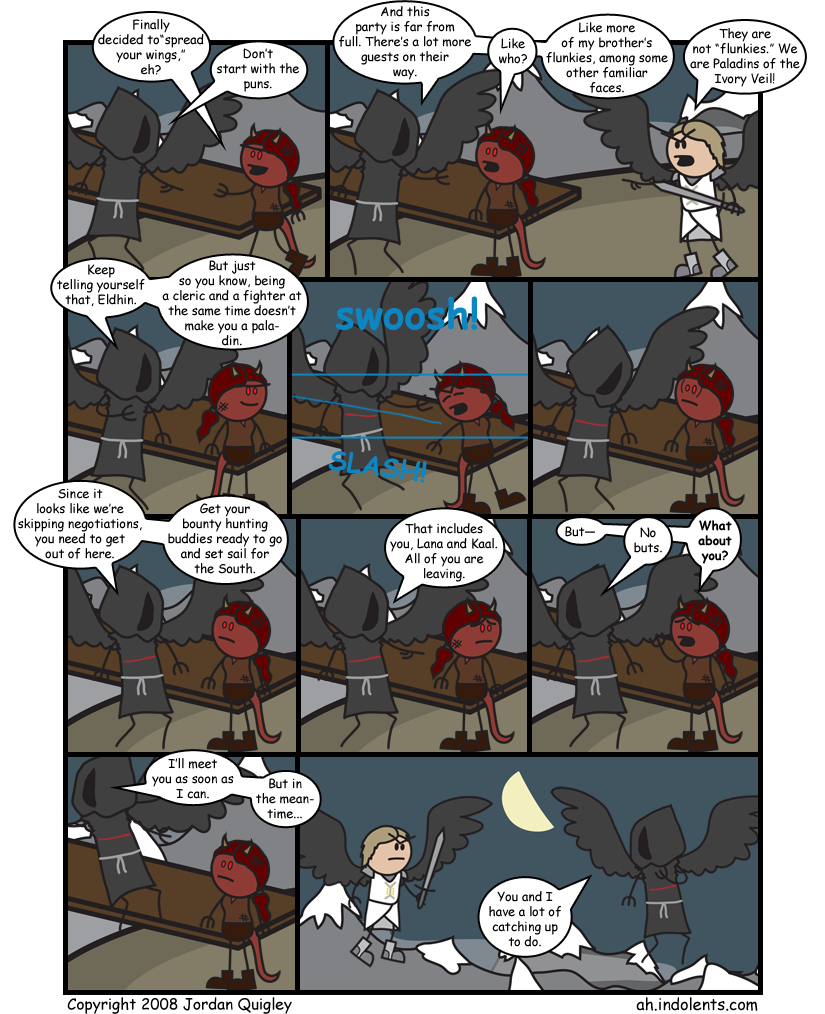 This comic is brought to you through a combination of four things: 1) School work taking up my time. 2) Spore and Dwarf Fortress taking up my time. 3) A number of other writing projects (one of which I will discuss later on in this post). And 4) A block the size of a house with "WRITER'S" written on it.

I've had this scene in mind for months. And I mean waaaay back before I had even hit issue #30. But when I finally get to the point that I can show it off, I come screeching to a halt. Although really, this isn't much of a surprise. Past experience has shown me that it happens with anything I write. Either way, here's today's long overdue comic.

Oh, and for all those arguing about stuff in the comments, fine, but don't start flaming each other, whether you mean it or not. Things have a tendency to be taken differently over the internet. I've said it before, and I'll say it again: Play nice.

Now, on to what I mentioned up above. I've been working on a bunch of writing projects and one of them is a homebrew D&D campaign. But I have a bit of a problem with it. I don't know a lot of D&D players in real life (in fact, I don't know ANY), and since I'd like to playtest my campaign sooner or later, I can't exactly do it by myself. I have a couple friends online who could help, but I'd like to test it with more than just two PCs. This is where you guys come in. The campaign itself isn't finished yet, and I'm not sure when it will be ready for testing, but if you're interested in helping me out nonetheless, then I'd be grateful. And you'd get a first-hand look at what I've been working on.

We'd probably be playing on a play-by-post board (most likely Giantitp), and here's a few other things to keep in mind if you're interested:

- I don't really have a lot of experience as a DM. I can act as a fine player, but I haven't done a lot of DMing before. Not saying I don't know how, but don't expect me to be perfect.

- If you haven't figured it out from my comic already, I'm a storyteller.

Thus, my campaign is very heavily story-focused, so expect a lot of role-playing. Also, if you have a tendency to shudder at the very thought of a DM railroading you, you might want to avoid me.

I try not to use railroad tracks as much as I can, but I like having a coherent story as well. So in short, if you're planning on joining, make sure you can role-play.

- I plan big. As in, going from very low-level characters into high-level heroes. The XP distribution might be faster than a normal DM, but I do it to prevent the game from slowing down and make sure there's a steady sense of progress.

Anyway, if you're interested, then stay posted, or shoot me an email or something. If you have any questions, go ahead and ask. Oh, and thanks in advance to anyone interested.